Having sought rest, silence, and fall colors at a near by National Park on October 30th, the Harrington's found themselves longing for a little more. A little more rest. A little more silence and solitude. A little more color in the trees. On Thursday, Melissa enjoyed a short hike with her larger of the two Elementary Schools. She noticed the the mountain (or hill) was much closer to their apartment than the National Park and was much less popular with hikers. So she took some mental notes of bus numbers and landmarks and hoped her husband would be up for a fall hike come Saturday morning. Lo and behold, Saturday morning both Harrington's were ready and excited for a hike that held nothing back. Level trails as opposed to the straight up the side of the mountain as is common in Korea. Changing leaves, falling leaves, crisp air and all things autumn greeted the Harrington's on Galma-Dong's own Tan-Sol Mountain. A short hour and half hike and less than a hundred smiling Korean faces had the Harrington's feeling a little closer to home than the National Park trail from the previous week. 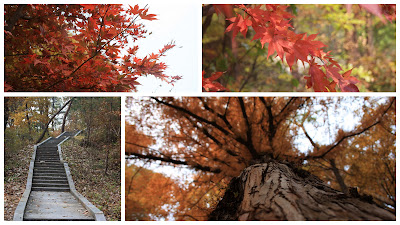 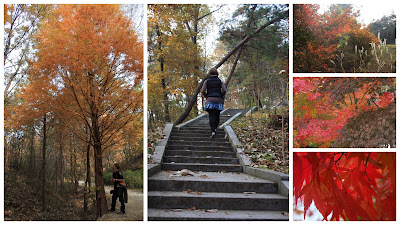 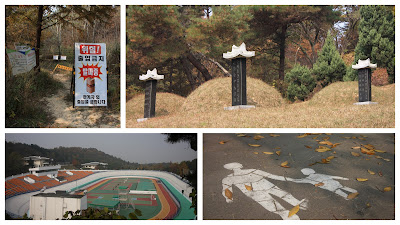 Getting There: Bus 301 goes right by the mountain as well as a few other unidentified bus numbers. As for when to get off, you'll probably have to go with the Harrington's for the best chance at that working in your favor.
Posted by Unknown at 1:27 PM

Email ThisBlogThis!Share to TwitterShare to FacebookShare to Pinterest
Labels: Daejeon, Getting There, Korea

In the life of Nikki and Gary said...

Those scenes are beautiful! I'm so intrigued by your journey... it's amazing!

yeah for fall and korea have a nearer and dearer place for your adventure!